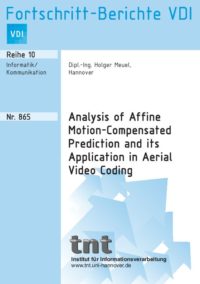 Although the bit rate in MCP can be reduced by using a motion model capable of describing the motion in the scene, the total video bit rate may remain high. Thus, a codec independent coding system is proposed for aerial videos, which exploits the planarity of such sequences. Only new emerging areas and moving objects in each frame are encoded. From these, the decoder reconstructs a mosaic, from which video frames are extracted again. This system outperforms HEVC by 90 %.

Finally, a fully automatic in-loop radial distortion compensation for the generation of long-term mosaics from 1500 aerial frames is proposed.